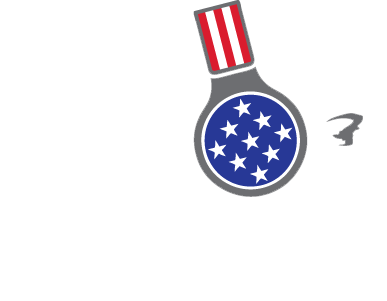 On January 22, 1963, General de Gaulle and Chancellor Adenauer signed a cooperation treaty intended to seal the reconciliation between France and the Federal Republic of Germany. 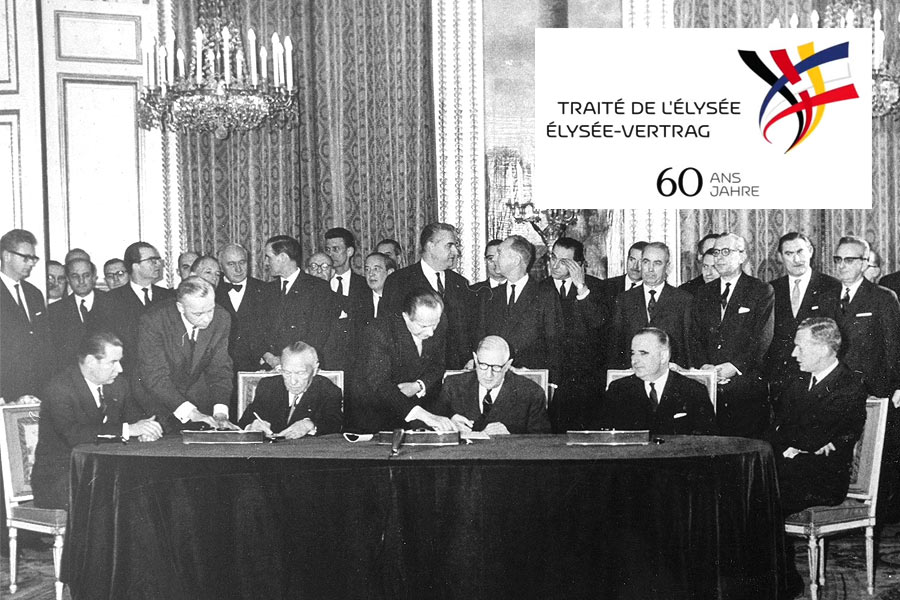 @franceintheus On Jan. 22, 1963, the treaty of 🇫🇷🇩🇪 friendship, the Elysée Treaty, was signed. It constituted a key step in the construction of the deep friendship that unites our two countries today.#france #french #franceintheus ♬ original sound - America's BFF since 1778. 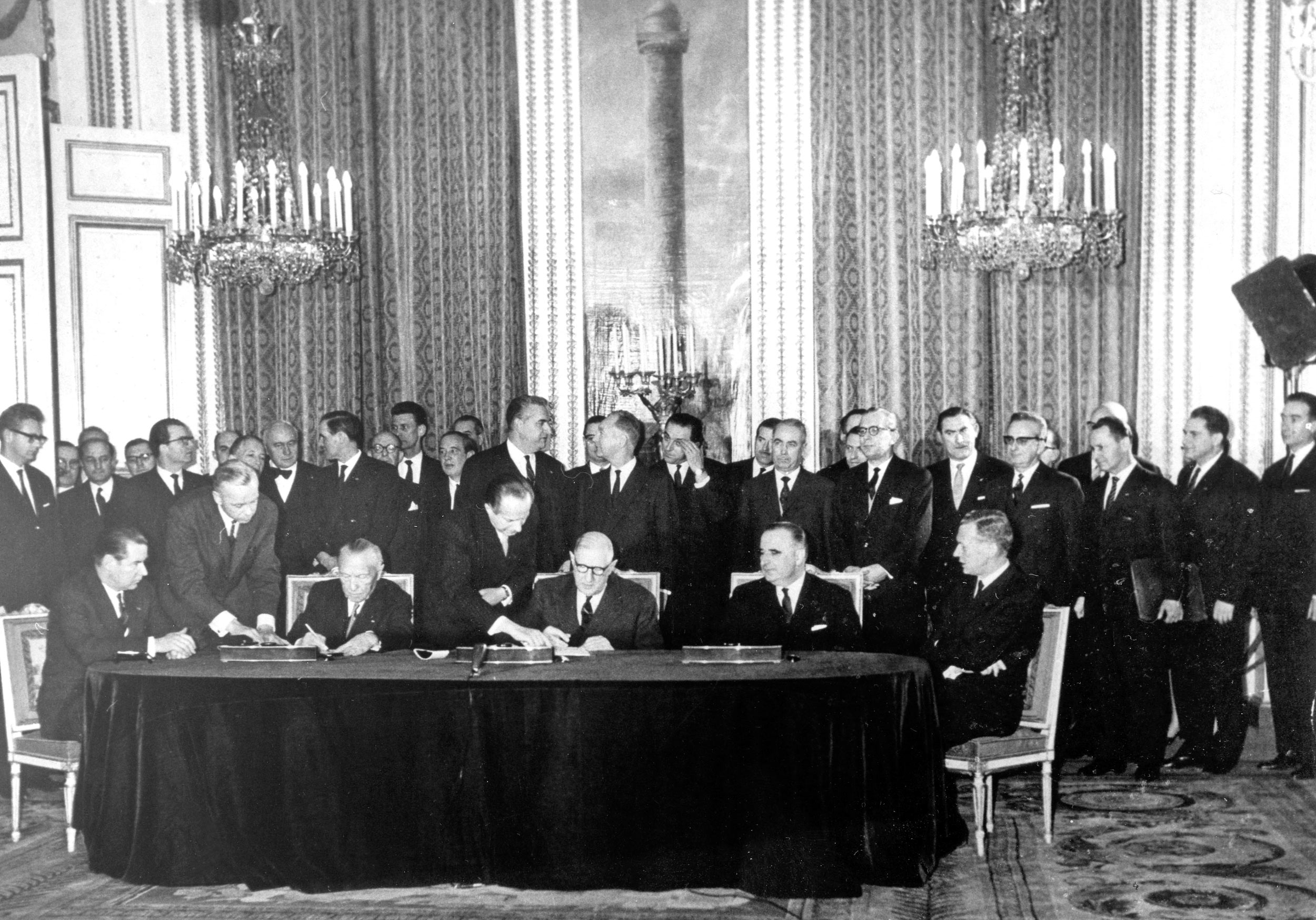 Following the Common Declaration of the President of the French Republic and the Chancellor of the Federal Republic of Germany, dated January 22, 1963, on the organization and the principles of the cooperation between the two States, the following provisions have been agreed upon:

1. The Heads of State and Government will give whenever required the necessary directives and will follow regularly the implementation of the program set hereinunder. They will meet for this purpose whenever this is necessary and, in principle, at least twice a year.

2. The Ministers of Foreign Affairs will see to the implementation of the program as a whole. They will meet at least once every three months. Without prejudice to the contacts normally established through the channels of the embassies, high officials of the two Ministries of Foreign Affairs, responsible respectively for political, economic and cultural affairs, will meet each month in Paris and Bonn alternately to survey current problems and to prepare the Ministers’ meeting. In addition, the diplomatic missions and the consulates of the two countries, and also the permanent missions to the international organizations, will make all the necessary contacts on the problems of common interest.

3. Regular meetings will take place between the responsible authorities of the two countries in the fields of defense, education and youth. These meetings will not in any way affect the functioning of the already existing bodies – French-German Cultural Commission, Permanent General Staff Group – whose activities will on the contrary be extended. Both the Ministers of Foreign Affairs will be represented at these meetings in order to ensure the overall coordination of the cooperation.

a) The Ministers of the Armed Forces or of Defense will meet at least once every three months. Similarly, the French Minister of National Education will meet, at the same intervals, with the person who will be designated by Germany to follow up the program of cooperation on the cultural level.

b) The Chiefs of Staff of the two countries will meet at least once every two months; in the event of their being unable to meet, they will be replaced by their responsible representatives.

c) The French High Commissioner for Youth and Sports will meet, at least once every two month, with the Federal Minister for Family and Youth Affairs or his representative.

4. In each of the countries, an interministerial commission will be charged with following problems of cooperation. It will be presided over by a high Foreign Ministry official and it will include representatives of all the administrations concerned. Its role will be to coordinate the action of the Ministries concerned and to report periodically to its Government on the state of French-German cooperation. It will also have the task of presenting all useful suggestions with a view to implementing the program of cooperation and to its ultimate extension to new domains.

1. The two Governments will consult each other, prior to any decision, on all important questions of foreign policy, and in the first place on questions of common interest, with a view to arriving, insofar as possible, at a similar position.

This consultation will cover, among other subjects, the following: Problems relative to the European Communities and to European political cooperation; East-West relations, both on the political and economic levels; Subjects dealt with in the North Atlantic Treaty Organization and the various international organizations in which the two Governments are interested, notably the Council of Europe, Western European Union, the Organization for Economic Cooperation and Development, the United Nations and its specialized agencies.

2. The cooperation already established in the area of information will be continued and developed between the services concerned in Paris and Bonn and between the diplomatic missions in other countries .

3. With regard to aid to the emergent countries, both Governments will systematically compare their programs with a view to maintaining close cooperation. They will study the possibility of engaging in joint undertakings. Since several Ministerial departments are responsible for these matters in both in France and Germany, it will be the duty of the two Ministries of Foreign Affairs to determine together the practical bases for this cooperation.

4. The two Governments will study together the means for strengthening their cooperation in other important sectors of economic policy, such as agricultural and forest policy; energy policy; communications and transportation problems and industrial development, within the framework of the Common Market; as well as export credits policy.

1- The following objectives will be pursued in this domain:

a) On the level of strategy and tactics, the competent authorities of both countries will endeavor to harmonize their doctrines with a view to arriving at mutual concepts. French-German institutes for operational research will be created.

b) Exchanges of personnel between the armed forces will be increased. These particularly concern professors and students from the general staff schools. They may include temporary detachments of entire units. In order to facilitate these exchanges, an effort will be made on both sides to give the trainees pratical language instruction.

c) With regard to armaments, both Governments will endeavor to organize a joint program from the the time of drafting appropriate armaments projects and formulating financing plans.

To this end, joint committees will study the research being conducted on these projects in both countries and will carry out a comparative study. They will submit proposals to the Ministers, who will examine them during their quarterly meetings and will give the necessary directives for implementation.

II. – The governments will study the conditions under which Franco-German cooperation can be established in the field of civil defense.

With regard to education and youth, the proposals contained in the French and German memoranda of September 19 and November 8, 1962 will be studied, in accordance with the procedures indicated hereinabove.

1. In the field of education, the effort will chiefly concern the following points:

a) Language instruction: The two Government recognize the essential importance that the knowledge in each of the two countries of the other’s language holds for French-German cooperation. They will endeavor, to this end, to take concrete measures with a view to increasing the number of German students learning the French language and that of French students learning the German language. The Federal Government will examine, with the governments of the Laender competent in this matter, how it is possible to introduce regulations making it possible to achieve this objective. In all the establishments for higher education, practical courses in French will be organized in German and practical courses in German will be organized in France, which will be open to all students.

b) The problem of equivalences: The competent authorities of both countries will be asked to accelerate the adoption of provisions concerning the equivalence of academic periods, examinations and university degrees and diplomas.

c) Cooperation in scientific research: Research bodies and scientific institutes will increase their contacts, beginning with more extensive reciprocal information. Concerted research programs will be established in the areas in which it will appear possible.

2. All opportunities will be offered to the young people of both countries in order to draw closer the ties that unite them and to strengthen their mutual cooperation. Collective exchanges, particularly, will be increased.

A body whose purpose will develop these possibilities and to promote exchanges will be created by the two countries with an autonomous administrative council at its head. This body will have at its disposal a joint French-German fund for the exchanges between the two countries of pupils, students, young artists and workers.

1. The necessary directives will be be given in each country for the immediate enactment of the preceeding. The Minister of Foreign Affairs will examine the progress made at each of their meetings.

2. The two Governments will keep the Governments of the member States of the European Communities informed on the development of French-German cooperation.

4. The two Governments may make any improvements which might appear desirable for the implementation of the present Treaty.

5. The present treaty will enter into force as soon as each of the two Governments will have made known to the other that, on the domestic level, the necessary conditions for its implementation have been fulfilled.

Done at Paris on the twenty-second day of January in the year one thousand nine hundred and sixty-three, in both the French and German languages, both texts being equally authentic.